Usually on the weekend we make some form of pancakes or some form of 'big breakfast' as we call it!  This past sunday I decided to make pancakes but wanted some form of change so this is what I ended up with.. 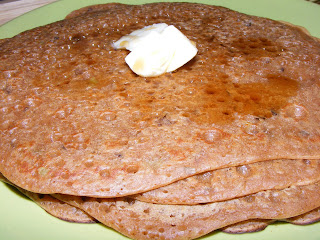 You just use your standard pancake mix..mine is as follows..

320g flour (either self raison or plain with a raising agent..i just added a tsp of bicarb soda)
640g milk
2 eggs
pinch of salt

Normally I put the flour and salt in the thermomix and turbo a couple of times to mix it through, then add the eggs and mix on speed 3 or so for a couple of seconds to mix through and finally i add the milk in two or three lots and mix after each addition until you have a smooth mixture.  Let sit for 30 minutes or so then cook as usual.

For this recipe though I put two apples, cored and quartered but with skin on (i used organic so I leave the skin) into the bowl and chopped on speed 4 to 5 for about 5 seconds or until finely chopped.  If you dont like 'bits' you could mix until a puree.  I then added  the cinnamon and brown sugar followed by the flour, salt and egg and mixed for a few seconds on speed 4 to mix well.  Finally add the milk in 2 or 3 lots until you have a smooth mixture.

Ideally you should let it sit for about 30 minutes but I didnt have any time so cooked it straight away and it was still fine.

You could serve it with whatever you like, either a little butter, maple syrup, cream, icecream, custard..whatever takes your fancy.  It was a nice change to standard pancakes..
Posted by Frozzie at 11:35 AM

Frozzie
Who am I? I am a French Aussie who has been living in France for 11 years now and even if it took me a while, I love living here and sharing in the experience of my kids growing up between two cultures. I love all that is homemade, especially food, made so easy by the Thermomix. A fantastic appliance that I bought last summer. I am a bit of a cookbook addict and love trying new things/recipes as well as cooking for others. I am a mum to two little munchkins and a wife to my darling hubby. This blog is mainly about food and cooking (as is my life) and the love of doing it! I am no expert cook or chef, just a mum who cooks at home and appreciates both old and new recipes, which for me revolves around my beloved Thermomix!

It's a fabulous kitchen appliance and is unrivalled in todays market. It's a very intelligent machine that not only chops, beats, mixes, whips, grinds and kneads but also minces, grates, juices, blends, heats, stirs, steams and weighs! It can also cook an entire meal all in one from soup or a sauce to rice, potato etc to meat and veg as well as many many other variations, an no need to stand by it, you can go and get something else done while its hard at work.

It makes it so easy to make anything from bread, juice, cordials or soft drinks, your own spice mixes to pastes, chutneys, jams not to mention pretty much any type of meal, icecream, sorbet and the list goes on and on and on.

The best part is that you dont have to be a good cook to start with and you are amazed at what you can make with your little kitchen helper!!

I am not a consultant nor have any benefit or involvement in the Thermomix world just an avid fan. It is the best purchase I have made as far as I can remember and like most owners you just cant help promoting it..it pretty much sells itself!